This was obtained from Social Security by the National Organization of Social Security Claimants Representatives (NOSSCR) and published in its newsletter, which is not available online to non-members. It is basic operating statistics for Social Security's Office of Hearings Operations. Click on the image to view full size. 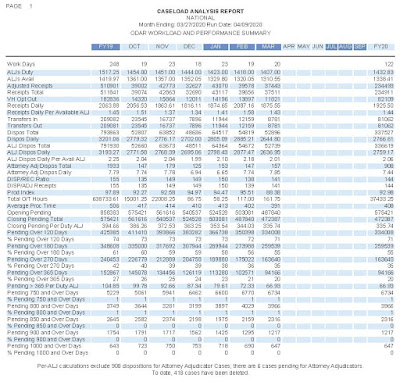 Posted by Social Security News at 6:00 AM

Pretty safe to say this trend is about to reverse, unless you're among those who apparently live in an alternative reality and, contrary to overwhelming evidence, believe that economic and employment conditions have little to no impact on the number of disability claims filed.

This has partially been a rearrangement of the deck chairs. In the past 24 months it has taken much longer for most of my initial filings to be opened and turned over to DDD. It has also been common to wait longer for the first two decisions. I don't think a miracle solved the hearing back load.

8:27: I, too, believe that disability receipts are going to start going up now. We've been locked down and working remotely now here in MI going on 2 months. Our new client totals during this time are noticeably larger than before and larger than last year at this time. With so many people out of work and with no ways to return to work, disability filing trends are going to go up, just like back in 2008.

Much of this is the assembly line mentality of OCALJ. ALJs being asked to do too many cases to adequately prepare and decision writers being threatened with firing if they do not turn cases. Rather than admit more time is needed to write good decisions and allowing the writers to do a better job, they are having local writers doing SCT work to keep them busy at this time, while cases are sent to writing units with little investment in providing a good product. Things are bad for those who want to get things right the first time.

Writers in the writing units have the same pressures to produce good written work as do writers in the hearing offices. And it's a team effort. Do your job and provide clear, concise instructions, and you'll usually get a good draft in return. If you provide irrational, 30 page "instructions" full of conflicting findings buried amongst random slivers of text copied and pasted from the e-CATs, then you should expect to get an unwieldy mess in return (or lots of questions). Similarly, if your instructions consist of nothing more than a few words of generic boilerplate (i.e. "Follow DDS; MER doesn't show disabling symptoms"), then you should expect a proportionate amount of effort from the writer. The writers are allotted a little more time than ALJs to work on cases, but the difference isn't really all that significant. And the extra time is for reviewing the file and writing, not for doing the parts of an ALJ's job the ALJ didn't feel like doing.

Agreed many are going to file for disability just because they could not find a job. Saw this a lot 1-2 years after the recession in 2008. But also saw a lot of cases where people got depressed about losing their jobs and never snapped back. Those are legitimate. It is hard to weed out the legitimate claims from those just needing a job.

The other reason that legitimate claims can come from an economic downturn is a lot of employers, particularly smaller ones, can tolerate a disabled person's limited productivity due to their impairments and provide accommodations during good times, but during bad times that's not affordable. Sure someone who lost their job and is simply using SSA as an unemployment program isn't eligible, but a lot of people are.