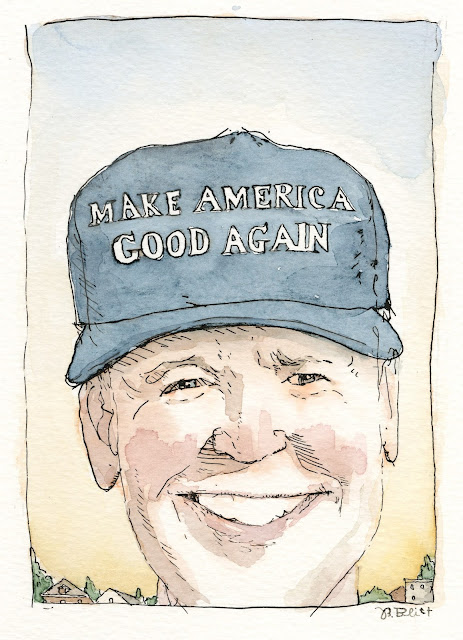 Not so fast, dude.

Do you think President Elect Biden will replace Andrew Saul of the Social Security Administration? Also will they stop the cruel proposal to do CDR every twelve months?

Do you think he will restore the prior grids that considered inability to communicate in English?

SSA dosen't have the manpower to do CDRs every year for everyone. Some people haven't had one in 20 years.

I'll bet his picture shows up quicker in SSA offices then President Trumps did ! We all worked for the US government and took an oath too !

Will the presidential selection even affect claimant's very much?
The ideological divide in this country continues. Unfortunately, both sides have blinders on when it comes to things such as the SSA programs. They each have a hard time seeing a bigger picture. Both sides have attitudes founded in only a part of the truth, but are unwilling to try to fix the overall problems. Example: Some posters above focus on the CDR's (one characterizes increased CDR's as being cruel as if taking someone off of the rolls on cdr was never going to be someone that wasn't functionally disabled).
Yes, DDS does not have the manpower to do more CDR's. Also, more CDR's wont solve much... We really shouldn't wait 20 yrs to do one, but too often isn't the main problem either.
Insufficient DDS (and SSA) manpower is the deeper cause of many of the problems with the national disability system, of which a major one is a sliding toward "easier" allowances over the years. For a CDR, when we originally (CPD) provide an allowance based on weak evidence that the claimant is disabled, it makes it difficult to EVER properly get them off in a CDR, without the examiner or DHO sidestepping the process, due to the nature of the CDR steps to finding medical improvement. It is not uncommon to see CDR's done on claimants that are essentially immune to ever being found to have MI (unless they choose to start working), even though their impairments are quite mild. I have seen many dozens of cases that created "lifers" from people with far less severity than we would normally allow a person with.
Ideologically, the need to have more CDR's is to get those type of recipients off the rolls, but the MI/CDR rules won't allow that to happen very much. It has to happen at the front end: don't allow those with only mild impairment in the first place. To do that you need more manpower and not place an emphasis on hurrying to close a case. BTW, allowance is much faster and easier than a denial, if you know DDS work at all. Anyone that jumps up and says "default is to deny" doesn't have a clue how DDS work load operates and almost certainly has never done the DDS work themselves. An examiner can STOP working a case and clear it as soon as they get a doctor to give them an assessment that means allow... otherwise they have to keep developing, and developing... every discovered or alleged (or newly reported) impairment or source, ad infinitum. I am sure some of the reps reading this are abusing this process already (e.g. keep throwing a new source at DDS), but may not know exactly why their abuse works. That issue is more complex than you might think, and is much too large to discuss here.
Instead of hurrying to move cases out, which is what too little manpower causes, we should emphasize correct decisions. Yet the ideological base that favors getting people off disability, are also the ones who resist hiring the examiners (or govt employees in general) because they think its somehow "wasteful". So their attitude CAUSES the manpower shortage that downstream causes the decision gaps we have, and that they think will be solved by more CDRs.
On the other side, being too liberal and leaning toward giving more allowances, causes a poor public perception of how functionally meaningful a "disability" finding is. When you break down that meaning, you foster public perceptions that, for example, "the disabled are just a bunch of drug addicts" (short hand for "they don't deserve it"). So in the long run this camp shoots themselves in the foot, too. Disability benefits were never meant to be general public assistance. It has to be based on a severe impairment (in the colloquial sense of that term, not the twisted "more than minimal" sense that SSA/DDS uses it at step 2.